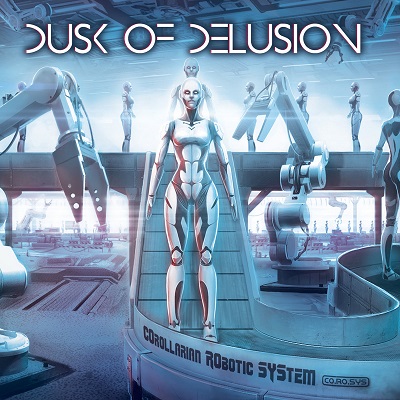 
French band Dusk of Delusion is a self-described modern metal band from France that have been active since 2016, with one EP and three studio albums to their name at this stage. "COrollarian RObotic SYStem [CO.RO.SYS]" is the name of their most recent production, which was released through the French labels Fantai'zic and Metal East Productions in the fall of 2022.

While I don't really know what modern metal means, the closest I get in my own perceptions are bands I sometimes will describe as contemporary, what French band Dusk of Delusion provides on this latest album of theirs isn't really what I'd describe as modern metal inside of any specific context.

This is an inclusive variety of the form however, where the recurring element is how the band will always find space and room for dark toned, majestic and ominous passages in the songs. Sometimes in more of a good, old fashioned heavy metal manner, on other occasions with a more powerful impact riff leading the way or groove-oriented fluctuating riff patterns taking charge. With raspy and beefy lead vocals emphasizing the dark as well as the majestic dimensions of the landscapes explored.

The band are clever enough to break up and alter the proceedings inside the individual songs too, alternating between the three orientations described above for starters, but also by segueing over to landscapes with a bit more of a power metal drive and on occasion touching base with a bit of thrash metal too. In between we also get gentler or more sparse arrangements that adds to the dynamic touch already present, on one occasion the organ is brought in with a prominent placement for a bit of a Gothic feel, and all throughout the album we get small atmospheric laden parts with and without a futuristic touch, and in a related context one of the songs also feature a little bit of an industrial feel to it.

The album is also a concept album, based on a science fiction story, and judging by the tone of material on this album I would assume that the story in question isn't the happiest one.

What I can say is that the album as a whole comes across as a very solid experience. The songs are dynamic, use contrasts well, with some nice flowing guitar solo runs a regular feature that also contrast the underpinnings of the songs in addition to the dynamic elements, and arguably with a little bit of a progressive character present too. If dark, majestic and dynamic metal incorporating multiple style elements and exploring a presumed dystopian concept sounds like an interesting proposition, this is a production worth investigating further.

Popular posts from this blog

(52:08; Fastball Music) Track list: 1. The Birth of a Star 1:29 2. Nocturne of Cold Mystery 4:45 3. Through Fire 5:48 4. By God 4:30 5. To Ailsa Rock 8:57 6. Reprise: Harbor Lights 1:59 7. Hibernation 5:28 8. Dark Night of the Soul Pt. I 4:18 9. Seven Years 4:58 10. Viator 3:53 11. The King's Song 6:03 Line-up: Raphael Gruenig - drums Benjamin Wiesli - guitars, vocals Elia Schmidt - vocals, bass Miril Schmidt - vocals, piano with: Judith Stuber - cello Swiss band Askara has been around for around a decade at this point, and released their debut album "Horizon of Hope'' back in 2016. Following a succession of single releases the band released their second album "Lights of Night" in the spring of 2022 through German label Fastball Music. This is a production that has been made with a fairly strong, distinct and uniform focus in mind from what I can hear: To make use of distinct contrasts between light and dark and between the harsh and the beautiful. The vocals
Read more

(50:01; Apollon Records) Track list: 1. Faded Memories 6:27 2. In Vain 4:37 3. Point of No Turn 6:39 4. Insert Coin 3:26 5. Screams at Night 3:13 6. Finding Failure 5:39 7. Daytime TV 5:21 8. Sensible Scenes 6:16 9. Lid 1:30 10. While It Lasted 6:53 Line-up: Tore Torgrimsen - vocals, guitars Stian Mathisen - guitars Eivind Mjelde - drums Svein Grindheim - bass with: David Christian Smith - vocals Iselin Börve Toft - vocals Norwegian band Green Sky Accident have a history that goes back almost 20 years from what I can see, and while I have never really been aware of the band until now in 2022 they have managed to release a handful of albums over the years, both self-released productions and material released on various labels. "Daytime TV" was launched in the spring of 2022, and this fifth album by the band is their first on Norwegian label Apollon Records. One of the numerous aspects of music styles that I've never really been able to get comfortable with is the differenc
Read more

(33:58; WTF Records) Track list: 1. Intro & Wise Old Man 4:24 2. The Devil Is Hidden in Shadow 3:12 3. Adolescent Humanity 2:22 4. The Two Heads Monster 3:16 5. Masked Enemy 3:19 6. I Warn You 3:14 7. The Downside of Progress 1:09 8. Who Dares Wins 3:58 9. Passion vs. Fashion 3:16 10. Blinded by Cruelty 3:48 11. Awakening of Consciousness 2:00 Line-up: Not stated. French band Primal Age have a history that goes back to the early 1990's, although they apparently haven't made too much history inside the recording studio in their almost 30 year long history. Their album "Masked Enemy" dates back to 2021. It is their third full length studio album to date, and was released through the label WTF Records. While I see this band referenced in a hardcore context as well as in metalcore and something called edge metal, I belong to that age segment and demography that will describe the music this band explore as thrash metal, and then a variety of that style that comes with
Read more